We have three machines, Dell 1950 III's with

This is how they are setup : 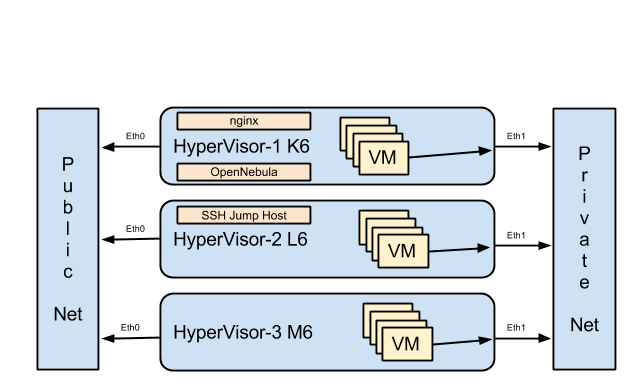 OpenNebula is used as as the cloud controller, with the sunstone interface available via ssh -D tunnel to the SSH jumphost. All VM's instantiated under there are also only available on the private network 10.0.10.x visible via the jump host. The datastore transport is setup to be ssh, so all images are copied over, then instantiated (we could move to nfs, which will drop the time taken dramatically)

The ci.dev.centos.org interface runs on 10.0.10.196 with the nginx instance on hypervisor-1 redirecting http(s) traffic from the public internet to that machine instance.

Credentials for the Jenkins Web UI can be found in the root home directory.

We need this procedure to two reasons:

iptables are in place on all three machines. The following services are allowed on the public interface side:

On the private side all traffic from/to 10.0.10.0/24 is allowed. Further more masquerading is in place on K6 to allow outbound traffic from the VMs.

Using dnsmasq and nginx centosk6.c.o is used as a local mirror for the VMs instantiated for the tests. dnsmasq answers for both mirrorlist.c.o and mirror.c.o with the local IP of centosk6.c.o. Furthermore nginx is enhanced with PHP (php-fpm) to handle/answer the mirrorlist.c.o requests regarding arch/version/repo. This mirror is also used for all three opennebula hosts.

There are currently two sets of images available - both for C5/C6 in both architectures:

The images have been build using projectraindrops.net.