Git is the version control software of choice for us here at the CentOS Project. If you are new to this, there are some great resources including getting started guides at http://git-scm.com/

Git is included by default in CentOS distribution.

The CentOS project hosts our sources at https://git.centos.org and we consider this to be the canonical upstream for the project. Various efforts, as a part of the project, might choose to also mirror their content in other places like Github. However all release content must be built from, tested via and curated at git.centos.org.

https://git.centos.org is now running on Pagure

See below how you can automatically be granted access on some branches, based on your SIG group membership (with your ACO account)

The git.centos.org pagure instance uses now ACO to grant you access to some git projects hosted on this server. That means that you need first to have your ACO account (feel free to create one yourself on the ACO portal if you don't have yet your CentOS account. 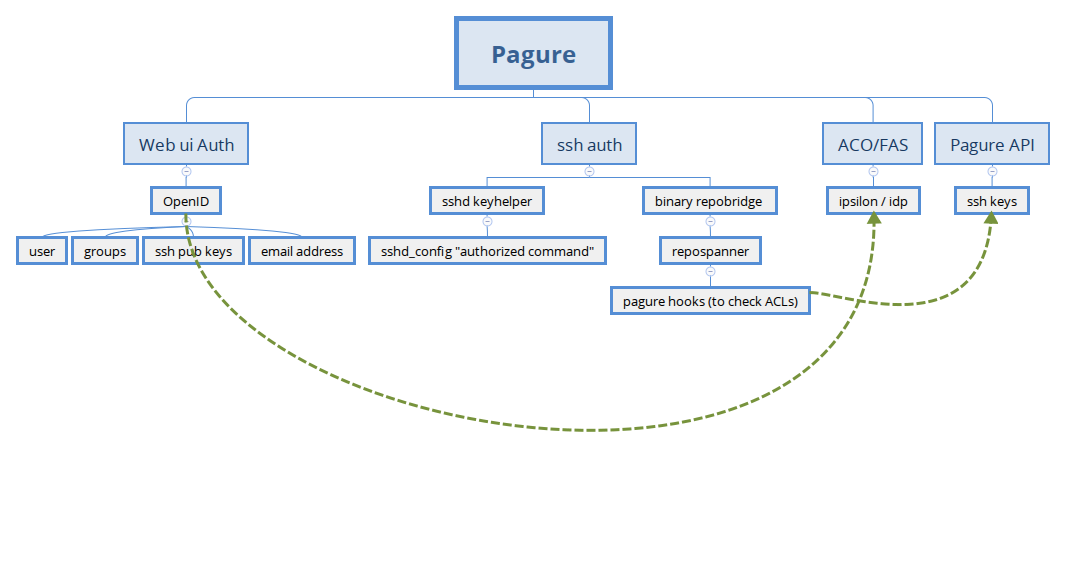 During your first login on https://git.centos.org, your settings from your ACO account will be synced over :

Everyone considering consuming and contributing content to git.centos.org must first clone and setup the centos-common code, which is available at: https://git.centos.org/centos-git-common

The git command to clone this would be:

This git repository contains, amongst other things, the get_sources.sh script. This script, when run from a git checkout for an rpm git repo will parse the non-text-sources metadata file, and download the relevant files, setting up the SOURCES/ directory. You may want to create a symlink to this script from ~/bin (see the example session below).

Assume we want to work with the CentOS kernel sources.

If you just want to download git repositories and/or sources, you can (anonymously) use the get_sources.sh method described above.

You already have an ACO account and are part of a SIG ? Then for each git repository under the /rpms/ namespace, you have already RWC to some branches. There are automatic ACLS for SIGs, and by default it goes like this :

Example : If you're member of the SIG-cloud group , you automatically have push rights to the following branch : c7-sig-cloud-rdo-queens

We only checkin text sources into git. All non-text sources are extracted, hashed (sha256sum'd) and uploaded into their own lookaside cache at https://git.centos.org/sources/ They are organised into groups that map to the branch of git to which they apply and are further grouped into the git repos to which they belong. The fully qualified path to those non-text-sources would then be https://git.centos.org/sources/<git repo name>/<branch name>/

Note that there is a special case for zero byte files, that are neither checked into git nor pushed into lookaside. These files are however still tracked and reproduced via the non-text-sources metadata file.

Every git repository has one of these metadata files named .<git reponame>.metadata and hosted in the root directory of the git checkout/branch. This file is used to map the sha256sums to their full filenames and are consumed by the get_sources.sh script.

See the get_sources.sh script describe above

You can already push some sources directly, based on your group membership. Let's assume that you're member of the SIG-Cloud group, you can then push to <git repo name>/<branch name>, and so like c7-sig-cloud-rdo-queens (same principle as for the Git branches that your membership grant you RWC rights to)

While a new tool called centpkg will be developed/used in the future, you can already use a curl wrapper tool called "lookaside_upload". You can find this tool in the centos-git-common git repositoriy also mentioned above.

All activity happening on (public) git repos hosted on git.centos.org will trigger a mqtt notification (message payload) posted to our dedicated MQTT broker hosted for this on mqtt.git.centos.org.

How can you subscribe to that MQTT broker (if you want to automate some workflow) ? The only requirement is to trust our ACO (https://accounts.centos.org) CA cert and also to have your TLS cert from ACO. All those steps are done automatically through centos-cert (from centos-packager, see https://wiki.centos.org/HowTos/CentosPackager)

From that point, you can use your MQTT client of choice (mosquitto_sub from mosquitto pkg, or python-paho-mqtt for python client, etc) and point to mqtt.git.centos.org:8883

The message payload is a json that you can decode, and the topic is automatically created by pagure when pushing mqtt notifications.

There is currently no way to get emails notifications for *all* repositories and so get mails notifications for git push operations. Should you still need this, consider instead the MQTT broker method, or if enough people would like this, we can also eventually create a bridge that would post all that to a dedicated mailing-list hosted on https://lists.centos.org (nothing discussed nor decided so far - just an idea)